Want to watch a video film on the PS3 (Playstation3), but he does not play? This occurs because the console plays video only in a specific format. You can, of course, search the Internet movies, formatted specifically for the PS3, but there is a better way. Use for this purpose a special program that will convert your movie to a format supported  PS3. PS3 Converter  can convert almost all popular SD and HD video formats, including AVI, MPEG, WMV, MKV, MOV, VOB, in the formats MP4, H.264 / MPEG-4 AVC videos for PS3. PS3 Video Converter also supports extract audio from video and convert it to audio MP3, AAC, M4A, etc.
You can even look at the console of your favorite DVD movies, converting it into a format that supports consoles PS3, with the help of this converter. PS3 Video Converter allows you to change the brightness, contrast, saturation, video, and apply other effects, including turns, noise reduction and sharpness setting. You can also convert interlaced video to the progressive video, this function can optimize the video effect. You can view the resulting video in the preview window, which is located in the right part of the program, before starting the conversion, which greatly facilitates the settings of video and audio and enables optimal quality video file. 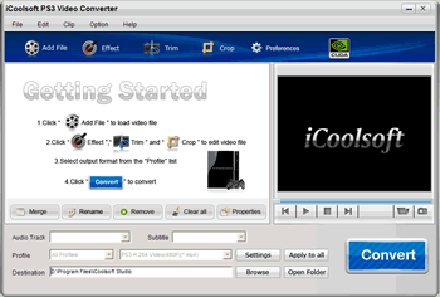 Currently, there are a wide variety of programs for all occasions. On this website there is only a small part of them, but these programs can certainly help you out in difficult situations. Here is the software of different directions: converters, utilities for working with office applications, software for password recovery and disk cleanup, as well as many others. We hope they will be useful to you. All software offered here, you can download free.